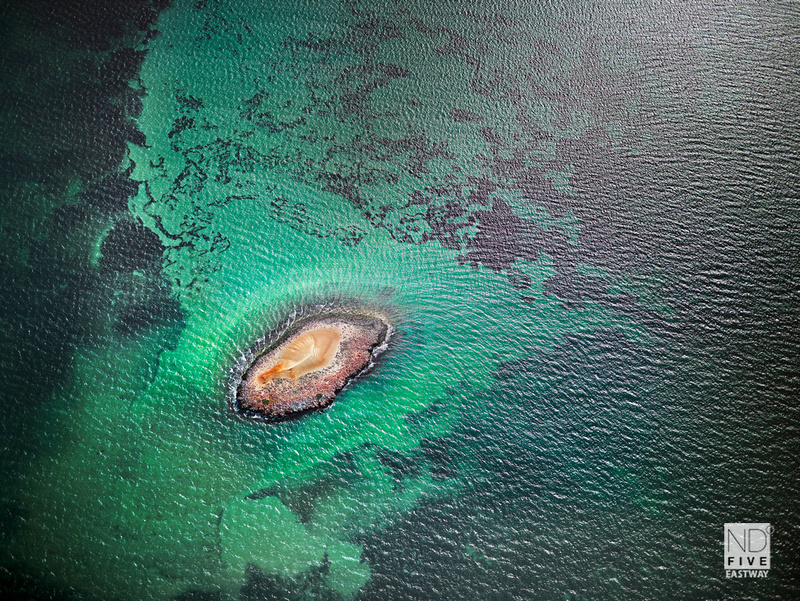 The idea to photograph Shark Bay was Michael Fletcher's with the ultimate objective of participating in the 400-year celebrations of Dirk Hartog discovering Australia - hence the exhibition's name: 2016 - Shark Bay: Inscription.

Along the way, the Ninety Degrees Five collaborative staged several, large format exhibitions in 2013 and 2014, pushing aerial photography in new directions with the use of high quality medium format cameras and distinctive post-production techniques based on high contrast and strong colour saturation. In addition, Tony Hewitt won the AIPP's Australian Professional Photographer of the Year in 2013 with four aerial images from the Shark Bay project, and the '2016 - Shark Bay: Inscription' fine art book featuring 40 aerial works won the 2014 AIPP Photo Book of the Year. The photography was not only commercially very successful, but has featured in public exhibitions, both in Australia and around the world.

However, the main objective has only just been concluded, with a special exhibition of the work on display as part of the Dirk Hartog Voyage of Discovery celebration, commemorating 400 years since Dirk Hartog made landfall off the coast of Western Australia.

On display at the Shark Bay World Heritage Discovery & Visitor Centre in Denham, Shark Bay, the exhibition is described as "an aerial exploration of Shark Bay, an untouched World Heritage listed area in WA. The unique viewpoint the ND5 group present Shark Bay from is a contemplative vision of one of Australia’s most unique and cherished landscapes. The collective aims to tell the story between the bay and the ocean; between feral destruction and its regrowth/rehabilitation; between European landing and country; between the ‘lie of the land’ and landscape mythology; between eternity and ourselves; and the realisation that there are other ways of mapping reality than those that dominate our everyday lives."

The exhibition was very well received and included visits by King Willem-Alexander and Queen Maxima of the Netherlands, as well as the country’s Foreign Minister Bert Koenders and Trade Minister Liliane Ploumen.

The Shire of Shark Bay has purchased a large number of prints for continued exhibition in the area, so next time you just happen to be passing Shark Bay (okay, so that's not realistic given it's a 10 hour drive from Perth, but anyway), drop in and have a look!

Thanks to the staff at the Centre for providing the photographs of the October exhibition in Denham.